The youngest of seven brothers, Sajid is the only one among them to have completed primary education. His father is a drug addict who makes a living by herding goats for other people in his village. His mother is a housewife and visually-impaired.

Sajid’s brothers have abandoned the family, two of them were last heard from when they were imprisoned for drug-related offenses.

“I know his family and all I can say is that you haven’t seen extreme poverty until you’ve met them,” said Mr. Shehzad, Head Teacher of the Government Boys Middle School, Sadhoki. “He’d often come to school without any shoes and the teachers would all pitch in to buy him shoes.”

The teachers really liked him because he often scored the highest position in class. Mr. Shehzad recalls that quite a few times Sajid Ali would fall unconscious during morning assembly because he hadn’t had anything to eat for a couple of days.

When Sajid Ali started in Class VI, he became irregular and would stay absent for weeks on end. After a long summer break, Sajid Ali stopped coming to school altogether. Mr. Shehzad saw him herding goats with his father one day and struck his name off the student register.

When PEN adopted Government Boys Middle School, Sadhoki, Mr. Shehzad mentioned Sajid Ali’s case to PEN’s academic team. He was particularly saddened that Sajid had dropped out because he saw so much potential in the young boy.

PEN’s academic team members visited Sajid’s mother to convince her to let him continue his education. Sajid’s mother wanted her son to go to school but felt that he’d more useful to the family by earning daily wages.

Sajid’s father was adamant that he should not go to school.

“What the use?” asked Mr. Ali Akbar, Sajid’s father. “It’s not as if our son will ever become a Government officer. This way at least he brings home a couple of hundred rupees daily.”

PEN’s academic team didn’t give up there. They kept visiting Sajid’s home.

After several visits, they managed to convince Sajid’s parents to send him to school in return for an offer to sponsor his education. PEN offered to finance his college education as well.

Sajid Ali returned to school and rarely took days off.

He wants to become a police officer after completing his education. 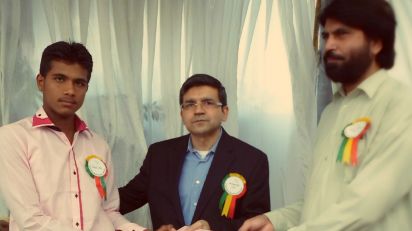