Over 2,000 participants from public and private schools all over Lahore were required to write an essay titled, “My ideal personality.”

Ms. Komal Latif, Class VIII of Government Girls Middle School, Kot Lakhpat, chose a farmer from her neighborhood as her ‘ideal personality.’  She’s inspired by his hard work, honesty, and a positive attitude in the face of adversity. He has to contend with steep leasing rates for farming land, and climate change which brings with it droughts and unseasonable rains. Given the lack of resources, the farmer has to work hard under the glaring sun without machines. She wrote that a farmer’s work yields wheat – staple of every Pakistani’s diet.

Ms. Komal’s essay won first prize among 2,000 participants. She’d only started to learn English a couple of years ago when the Government changed the curriculum to English-medium. Her competitors – private-school students learn English from Class KG.

“Komal is a voracious reader,” said Ms. Riffat – English teacher at Government Girls Middle School, Kot Lakhpat. “She asks me to bring her books in English language which I get for her from the Children’s complex.”

Ms. Komal’s family has to make do with very limited financial resources. When her father passed away in 2009, Komal had to drop out of school and work in people’s homes to make ends meet as her mother made a meager living as a house maid.

When PEN’s academic team came to know they began to visit Komal’s home and persuade her mother otherwise. After weeks of persuasion, Komal’s mother decided to let her finish her education on the condition that she’ll work in the evenings.

In order to support her three siblings, Ms. Komal does laundry work for people in her neighborhood after returning home from school. However, she remains determined to finish her education and enroll in University of Education, Lahore to become a teacher. 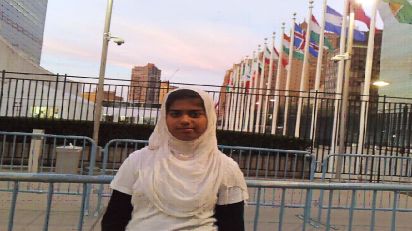